Meathead Movers is here to take care of the heavy lifting for you during your next move. Our Tarzana movers are clean-cut student-athletes, ready to get you safely settled into your new home. 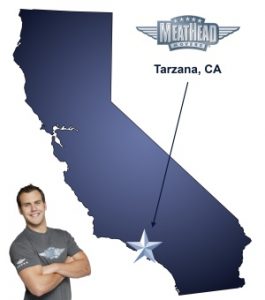 If you are looking at homes in the Los Angeles suburbs, you will need some Tarzana movers to help you relocate. Nestled at the base of the Santa Monica Mountains, Tarzana is a cozy bedroom community that is bordered by Encino, Woodland Hills, and Reseda. If you want to be away from the hustle and bustle of the city, but you still want to be close to civilization, this may be the perfect area for you.

In the 1700s, the area around Tarzana was originally settled by a group of Franciscan monks as part of the San Fernando Mission. During the late 1800s, the area was home to a large number of cattle ranches, and it later became a large wheat farm. Classic film buffs may find it interesting to learn that Edgar Rice Burrows, who wrote the Tarzan series, bought a parcel of land and named it after his fictional character. Tarzana was eventually sold and subdivided into smaller parcels, and the area grew rapidly after World War II.

Today, Tarzana consists mostly of single-family homes and a few apartments. Many residents, including several celebrities, make their homes in the Santa Monica foothills. It is also an ethnically diverse area that has a large number of both Jewish and Iranian-American residents. Tarzana has also been used as the location for various TV shows and movies. “The Karate Kid” and “Akeelah and the Bee” were both filmed here.

There are plenty of family-friendly things to do in Tarzana, including bowling, ice skating and hiking. There are also two large golf courses. If you like to eat healthy, there are several farmers markets in the area and a Whole Foods store. And if you’re looking for Tarzana movers who are honest and licensed, check out Meathead Movers. Our moving company specializes in local, long-distance, and commercial moves to, from, and within Tarzana. We also provide reliable packing, storage, on-site relocations, and our distinctive moving concierge service, which connects you with local service providers.

When you are ready to move, Meathead Movers can assist you every step of the way. Our employees are clean-cut student-athletes who can easily handle even your biggest pieces of furniture. Our Tarzana movers stay in shape between jobs and have undergone thorough background checks. We understand how important your possessions are to you, and we want you to know that we treat your valuables with the utmost care.

We invite you to experience the Meathead difference and call us for a no-obligation moving quote today.

“They were quick, courteous and treated my possessions like they were their own. Within just a few minutes of speaking to them about the move, they put every fear I had to rest, and when my Wife and I saw how expertly they packed our storage unit, we couldn’t have been happier! They have a customer for life due to the skill and work ethic shown by Jose Villa, Alex Horta, Miguel Sanchez and Devin Navanjo! ( Hopefully I got everyone’s spelling correct )
They are all amazing and deserve either a promotion and/ or a raise!
”

They were quick, courteous and treated my possessions like they were their own. Within just a few minutes of speaking to them about the move, they put every fear I had to rest, and when my Wife and I saw how expertly they packed our storage unit, we couldn’t have been happier! They have a customer for life due to the skill and work ethic shown by Jose Villa, Alex Horta, Miguel Sanchez and Devin Navanjo! ( Hopefully I got everyone’s spelling correct ) They are all amazing and deserve either a promotion and/ or a raise!

No Transport Residential Move from Tarzana to Camarillo

I am extremely happy with the job Meathead movers did for me yesterday. Movers were professional and polite. They were on time and did a great job packing and protecting furniture and securing them in the truck. I highly recommend them!

2 broken items when unloaded. One drawer of chest of drawers pulled apart and a substantial dent in the side of a lingerie chest.

The crew was prompt, helpful, careful and did a great job for our office move.

There were a number of issues with the move and experience. 1) I had a number of instances where I was promised a call back that I did not receive. Instead, I had to follow up myself and was forced to work with multiple different reps who all had to keep reviewing things/calling others to get info. Ultimately, this caused issue as my move was happening on a short time frame due to COVID and I really needed to be interacting with one person as much as possible since there were a number of variables. I did my best to make this happen, but I can't make someone else call me. 2) The rep I worked with, Sarah, did not adequately explain how your minimums worked and frankly I felt like the information was intentionally obscured. To expand on that, I was looking at two places, one in Oak Park (upstairs) and another in Tarzana (single story). The move was from N. Hollywood. I explained to Sarah that I was getting the estimate for the location further away just in case, but that it was likely we would be going to Tarzana. At that point, she told me that the move would be less if it was shorter. However, this was not the case. It turns out that what she should have been VERY clear about was that the maximum would come down, but that the minimum moving from North Hollywood was the same 4hrs no matter what. So, after I found out my final destination would be Tarzana, I called back to ask that the estimate be adjusted downward as the drive would now be shorter and the move would no longer involve stairs. Unfortunately, it was at this point, when I no longer had a chance to shop a quote, that I was told that your minimum was based solely on the fact that the move was originating from N. Hollywood, regardless of where we were going. Frankly, this felt entirely deceptive and the only response Sarah could provide when I asked about it was that "[I] must have misunderstood." 3) The movers showed up apprx 45 min late. My move was scheduled for 10:45. I got a call from the movers at 10am that they were running "a bit late and would arrive around 11." They showed up at around 11:25. 4) I was told numerous times that you take COVID seriously, and that your warehouse lobby only allows one person in at a time. While that is good, I still prefer not to go inside due to my own health conditions as well as those of my family. In light of that, I scheduled a box pickup at the Oxnard warehouse, and while everyone was kind enough to make sure that the box drop was as touchless as possible, I was still shocked to see that not a single person in the lobby, including the customer who arrived before me, was wearing a mask. That is 3 people behind a desk, and a customer. I know you cannot control customer behavior, but how can you be taking every precaution if none of your employees is wearing a mask? Don't they care about their own health as well as the people they live with? What about other customers who have to come in and interact with them? 5) I want to note that the two guys that helped me move were extremely easy to work with and I don't want any of my complaints to reflect poorly on them. Ultimately, my move took only 3 hours and was actually completed before the original 4hr window of 10:45-2:45 despite the movers showing up late. I think it is fair for me to be refunded the unworked hour (25% of $876 = $219) as it was clearly an unnecessary part of the estimate both upfront and in real time. Please feel free to contact me back at [email protected] or 818 264 6232. Thank you, Ben

I appreciated the follow through from booking, reserving, and to the guys showing up right on time with copies of the paperwork that I had forgotten to fax back to you. They patiently listened to my partners instructions and packed the items exactly as we requested. I will absolutely use Meathead again for my next move!!!

The 4 kids, were great. They worked together as a team and representatived your company extremely well. Well done Meathead’s!!!