A COVID-19 update to our team & customers: including increased safety protocols and flexible rescheduling options at no-charge. Learn More

Our clean-cut student-athlete Eugene movers are ready to get you safely settled into your new home. Meathead Movers is here to take care of all the heavy lifting for you on your move to or from Eugene, Oregon. 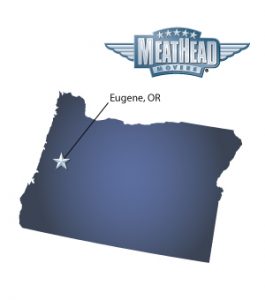 Making the transition from one city to another isn’t always easy, but choosing the right Eugene movers can make all the difference. Located just south of the Willamette Valley, Eugene is surrounded mostly by forested foothills and characterized by its cool, marine climate. Eugene is affectionately called, “The World’s Greatest City for the Arts & Outdoors,” as visitors and locals can enjoy numerous recreational activities from biking to kayaking. If your family is moving to Eugene, you are sure to enjoy the area’s beautiful climate, inviting arts scene, and progressive community.

Home to the University of Oregon, you’re likely to see plenty of green and yellow Duck’s gear being worn around town. While the University may be the second largest employer in the City, Eugene is much more than a typical college town. Eugene has become known as the “Track and Field Capital of the World,” and is the birthplace of the sports brand, Nike. The area’s music, performing arts, and film industries have grown more diverse with the population and cater to a broad spectrum of styles and tastes. Whether you’re moving for the culture, a new job or to further your education, you can count on our Eugene movers get you settled without skipping a beat.

If you’re new to the area, you’ll have a blast getting to know the history of Eugene. The Museum of Natural and Cultural History, Oregon Air and Space Museum, and the Jordan Schnitzer Museum of Art are a few great places to begin. The longstanding heritage of craft brewing is also alive and well, having experienced a resurgence in recent years. In fact, Eugene hosts an annual Microbrew Festival, celebrating the culturally and economically impactful breweries of the Pacific Northwest.

Making the most of your move to this beautiful city means choosing movers who understand your needs and know the local area. All of our Eugene movers are friendly, clean-cut student-athletes who study at nearby colleges like the University of Oregon and Northwest Christian University.

We know that interstate moves can be stressful, which is why we make sure that the same moving team is with you from beginning to end. Whether it be a local or long-distance move, Meathead Movers is here to serve you.

A move to Eugene means a fresh start for you and your family in the welcoming state of Oregon. We are so confident in the quality of our services that we even offer a 100% satisfaction guarantee! So, what do you have to lose? Contact Meathead Movers today for a free moving quote.

Moving to Eugene? Here are some helpful resources.

“We had a great experience with our movers. They were helpful, kind and considerate with our items on both ends of our move. Only one issue. I was fearful that all of our items wouldn’t fit on the truck and I was unable to reach our moving co-coordinator for verification. The result was we had to leave some items behind. We were disappointed. Other that that, Meathead movers was a good experience, albeit, very expensive. ”

Save time and money on your move!

We had a great experience with our movers. They were helpful, kind and considerate with our items on both ends of our move. Only one issue. I was fearful that all of our items wouldn't fit on the truck and I was unable to reach our moving co-coordinator for verification. The result was we had to leave some items behind. We were disappointed. Other that that, Meathead movers was a good experience, albeit, very expensive.

Get your free moving quote
Meathead Movers stores data such as cookies to enable important site functionality including analytics, targeting and personalization. For more information, please review our Privacy Policy.ACCEPTCLOSE